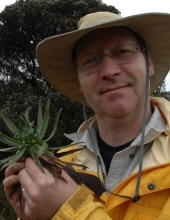 A burial service at Westfield Cemetery followed. A memorial gathering will be held on September 21, 2019 at Herrick Chapel on the Grinnell College campus at 2pm followed by a reception at Noyce Ahrens atrium. In lieu of flowers, the family asks that donations be directed to the Nature Conservancy, Hawaii chapter, Ka’u Preserve, the Jackie Brown memorial scholarship or CERA at Grinnell College.

Jackie was born in the Philippines in 1961. A year after his birth, the Brown family moved to Hyde Park, Chicago where Jackie lived and attended public school until he graduated from high school. Jackie attended Carleton College in Northfield, Minnesota, where he met Rebecca Loew. The two married after their graduation in the summer of ’83, and then spent ten months in Austria, where Jackie taught English. In 1984, Jackie began working toward a Ph.D. at Michigan State University in East Lansing. Eventually, Jackie and Rebecca relocated to Hickory Corners, Michigan where Jackie completed his doctorate in zoology at Michigan State University's Kellogg Biological Station in 1989. After completing a post-doctoral position at Cornell University in Ithaca, NY, Jackie and Rebecca moved to Lewisburg, Pennsylvania where Jackie continued as a post-doctoral research fellow and instructor at Bucknell University. In 1992, they welcomed Amelia Rose Loew into their family. Three years later the family moved to Iowa, when he accepted a faculty position in the Biology Department at Grinnell College. Adam Bernard Loew joined the family in 1997 and Grinnell continues to be the family home.

Rising quickly to the rank of Full Professor, Jackie was admired and loved by his students and colleagues for inspirational teaching, supportive mentoring of student researchers, and dedicated service. His research in evolutionary biology generated dozens of scholarly publications, earned generous support from the National Science Foundation, and left a legacy of numerous former students who themselves became professional scientists.

Jackie appreciated the many places in which he lived. He spent countless hours at CERA, not only teaching students, but also skiing, hunting deer with friends, and simply enjoying long walks on the prairie. He was dedicated to helping students find joy in nature and the study of it. Jackie’s interests extended to art, music, theater, literature and foreign languages. Jackie was proud that all of his siblings went into various forms of education, whether that be working with small children, teaching students about history and Shakespeare, or inspiring students with music and dance.