CLINICAL RADIOLOGISTS PC: Catnip: What do we know about the feline drug? 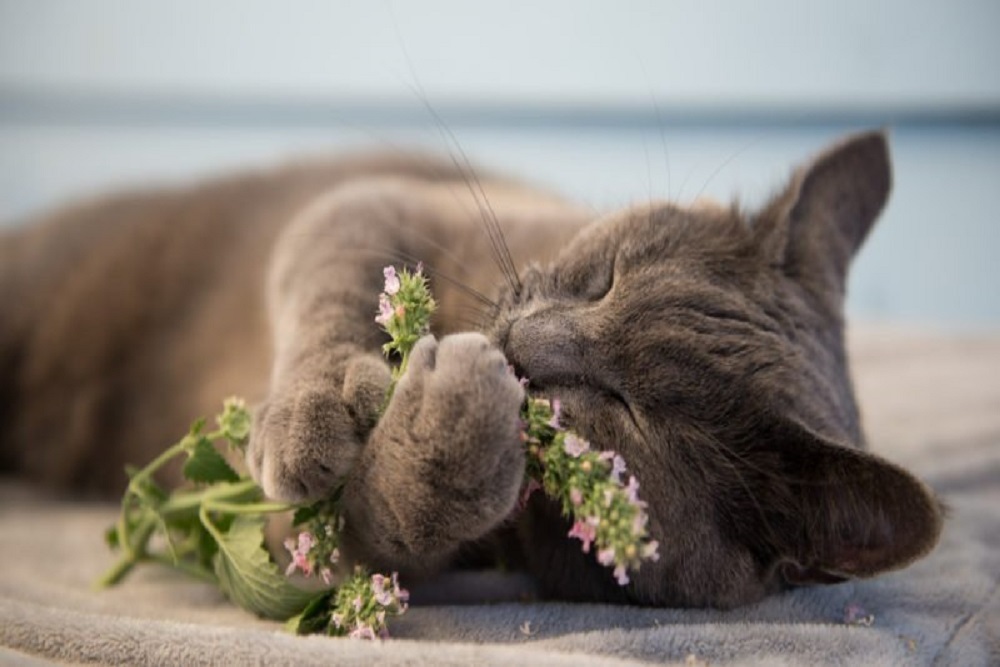 Nepeta cataria, or "catnip," is an herb belonging to the same plant family as mint. Although it originated in parts of Europe and Asia, the plant is now common across several continents, including North America.

Because, like regular mint, catnip proliferates easily, many cat owners grow the plant in pots as a special treat for their feline friends.

As part of the mint family, fresh catnip also smells minty, though this is not the case for the dried catnip sometimes present in commercial cat treats or toys, which may smell more like dried grass.

Why is catnip such a special treat? People who share their life with a cat will know that this plant often has a marked, and sometimes very funny, effect on these beloved animals — not unlike the effect that a mild recreational drug might have on humans.

Do all felines react to catnip? Why does this plant affect cats, exactly? Is it really akin to recreational drugs? Read on to find out.

1. Why does catnip affect cats?

In his book Intoxication: The Universal Drive for Mind-Altering Substances, psychopharmacologist Ronald Siegel estimates that around "70% of domestic cats respond to catnip," and that those who do have reached sexual maturity. Cats reach sexual maturity at around 6 months of age.

Cats who react to catnip will sniff the plant, or any toys that contain it, and then start chewing on it. Following this, they may start rubbing their head against the plant or toy, and then roll or flip from side to side.

"Both of [my cats] love it, and it makes them go crazy," one reader told Medical News Today. "[The female] likes to lick it, then she attacks the toy it's on, often adopting the bunny leg attack. [The male] goes more soppy with it, often rolling around with the toy in his paws," they said.

Although in most cases, when it does affect them, catnip stimulates cats in a pleasurable way, the American Society for the Prevention of Cruelty to Animals deem it "toxic to cats." They warn that some domestic felines may experience adverse reactions after coming into contact with this plant. These effects can include vomiting and diarrhea, as well as states of sedation.

Some cats may even become aggressive when they encounter the plant. Another reader told MNT that she avoids giving her cat any catnip for this very reason. "[My cat] just gets a bit like she wants to fight me [and] starts punching my foot," they said.

For the many cats that respond well to catnip, Siegel notes, this may be "an example of animal addiction to pleasure behavior." Both male and female cats respond to catnip in a way that is reminiscent of sexual arousal among these felines.

Because of these similarities, some researchers have suggested that the plant may once have been a timely and natural enhancer of reproductive behaviors.

"These displays have prompted naturalists to speculate that catnip once served the evolutionary function in the wild of preparing cats for sex, a natural springtime aphrodisiac."

He explains that the molecules that carry catnip's scent, called terpenoids, are what causes the reaction. Catnip features a specific type of terpenoid called nepetalactones. These molecules, Siegel explains, can be toxic. However, they are usually harmless in the quantity in which they are present in catnip.

Cats absorb nepetalactones by sniffing the catnip. The molecules then bind to olfactory (smell) receptors in the nose, which send additional signals to the amygdala, which are two small clusters in the mammal brain. These are linked with both the regulation of emotions and some sexual behaviors.

2. Why do some cats not respond?

About 30% of domestic cats have absolutely no reaction to catnip. One MNT reader exclaimed that it "has no effect on [her cat] whatsoever!"

Why does catnip affects some cats but not others? The difference, Siegel argues, lies in cat DNA. Some cats inherit the "catnip sensitive" gene, while others simply do not.

"The reason for the failure of some cats to become even the least bit excited about catnip and for the exaggerated reaction of others is genetic," he writes.

"Cats can inherit a dominant gene that guides the reaction to catnip," adds Siegel. He adds that some studies have demonstrated that the offspring of cats sensitive to catnip are also sensitive to this plant, and that those of cats with no reaction to it also will not respond.

In addition to this, he says, some felines may become avoidant of catnip if they have had a bad experience with it.

For instance, notes Siegel, if a feline has sniffed or chewed on catnip and then injured itself, in the future, it may turn around when encountering the plant, instead of jumping at the occasion of accessing the stimulant.

3. Does catnip affect other felines?

If catnip can have a striking effect on domestic cats, does it also affect larger felines, such as lions, jaguars, and tigers?

The answer is "yes" — and it seems to act, to a much lesser extent, on other cat-like mammals that are not actually felines.

An experiment conducted in the early 1970s at what is now Zoo Knoxville in Tennessee found that lions and jaguars were "extremely sensitive" to catnip.

Some of the tigers, cougars, and bobcats at the zoo also responded to catnip, though not at all strongly. The two cheetahs on site at the time showed no interest in the plant.

Other animals have shown curiosity about catnip, though to a much lesser extent than domestic cats.

Non-felines that have shown an interest in catnip include civets, which are carnivorous animals native to Asia and Africa that look like cats but belong to a different family, called Viverridae.

4. What other stimulants affect cats?

Though catnip is by far the best known cat stimulant, researchers have noted that there are many other plants that can alter felines' moods and behaviors.

Siegel, for instance, speaks of matatabi, or silver vine (Actinidia polygama). This is a plant native to areas of Japan and China. In an experiment at Osaka Zoo in Japan, large felines exposed to high quantities of the active substance in matatabi showed signs of intense pleasure — and addiction.

"After an initial exposure, the [large] cats became so eager for more that they would ignore whatever else they were doing — eating, drinking, or even having sexual intercourse — whenever the chemicals were made available."

One 2017 study confirmed that matatabi can be just as, if not more, effective than catnip when it comes to stimulating domestic cats.

Almost 80% of the domestic cats in this study reacted to matatabi, and around 50% of cats also responded to Tatarian honeysuckle and valerian root.

Matatabi, the study authors also note, actually elicited a response in 75% of the domestic cats that had no reaction to catnip.

"Olfactory enrichment using silver vine, Tatarian honeysuckle, or valerian root may, similar to catnip, be an effective means to improve the quality of life for cats," the researchers conclude.

5. Is catnip safe for humans?

Although humans tend to buy or cultivate catnip purely for the entertainment of their feline friends, some people think that the plant can have a soothing effect on their own minds.

For example, some people like to brew catnip tea, and some have even tried rolling the plant into cigarettes and smoking it. "It makes people feel happy, contented, and intoxicated, like marijuana," an older study notes.

As a supplement, people have also used catnip to treat symptoms such as coughs or toothaches, and as a digestive aid.

Is it safe? This much remains unclear. So far, there has been little research into the effectiveness or safety of catnip when it comes to treating various conditions in humans.

Some specialists suggest that catnip can cause contractions of the uterus, so they recommend that pregnant women avoid this plant.

Given the scarcity of evidence regarding the safety of this plant, however, our readers may be better off saving it for their cats' enjoyment — that is, if they are part of the majority that do appreciate it.